Get in touch with us

Daniel is Executive Director of Amnos Ministries and Principal of Amnos Church Planting School. He was a Council member of the UK Evangelical Alliance (EA), and is now a member of One People Commission of the EA. He is also a Research Associate of the London School of Theology and is married to Helen – they have three grown-up daughters. Daniel has a broad combination of theological, pastoral and missionary experience:

Daniel was Managing Director of MV DOULOS (2004-2009), a floating Christian community of 350 volunteers from 50 nations. Earlier he served on MV LOGOS (1979-84) and on MV DOULOS (1987-88). On these ships he visited around 90 countries with the gospel. In some countries he planted churches which are still growing and are establishing new churches today.

From 1997-2004 Daniel planted and established Eastbury Church (1997-2004), a predominantly British congregation, on the outskirts of London.

After obtaining a BA in Business Management in Korea, Daniel was awarded a BA (Hon.) and a PhD from London School of Theology. His PhD thesis on Romans was subsequently published under the title, Paul as Apostle to the Gentiles (Paternoster, 1997). Further to this his work, The Historical Paul in Acts was also published (Paternoster, 2019), and another academic book on Paul is forthcoming. He has also written four books in Korean, a number of academic and devotional articles and also given special lectures at a number of universities and colleges around the world. He is a regular speaker at international Christian conferences.

As a native Korean, Daniel is keen to ‘pay back the debt of the gospel’ to the UK Church, which blessed the Korean Church by sending Rev Robert Thomas, the first Protestant missionary to Korea in 1865, and Rev John Ross who first translated the New Testament into Korean in 1887 (among others). Rev Thomas was martyred upon arrival on his return-visit to Korea in 1866! 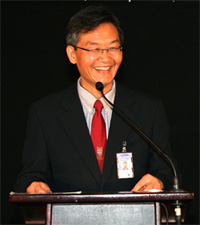